Tyneside entertained Penrith, making their debut in this competition, at Exhibition Park.
Terry registered the first win of the day over Ed, coming from behind but Penrith hit back shortly after in the morning's other singles as Derek never managed to catch Ian despte closing the gap.  In the doubles David and Eric triumphed, despite Eric committing a grievous, to put Tyneside 2-1 up at lunch.
Terry came up trumps again in the afternoon putting Tyneside within one game of victory.  That one game proved to be more elusive than seemed likely as David was overhauled by Ed in the closing stages.  Derek had been 14 hoops behind halfway through the game and closed the gap to two before running out of time to make it 3-3.
Up on the Clock Lawn Eric was reportedly well clear but Ian cut the lead and was only 1 hoop behind when he started the last turn.  Unfortunately, instead of approaching rover he went to the wrong side of the hoop and was left one hoop short.  So the difference between the two clubs boiled down to just 1 hoop.

A disappointingly low number of entries meant the tournament was shortened to two days from its usual three days.  What it lacked in quantity it compensated for in quality however with the highest handicap being a 10 and two entrants having handicaps of 0 an -0.5, stronger than has been the norm.
The six entrants played an American Block with a tie breaker of the number of peg outs to reward attacking croquet.
At the end of the first day Terry Vernazza was clear at the top with a 100% record from his three games. Andrew Killick (Middlesbrough) and Chris Roberts (Phyllis Court) were tied on 2 wins.
Going into the last round of games any of those three were potential winners but it was Andrew Killick who emerged victorious.  He and Chris were tied on four wins, with four peg outs, which necessitated the second tie breaker of who beat whom.  Andrew's 26-15 win in the third round of games proved decisive. 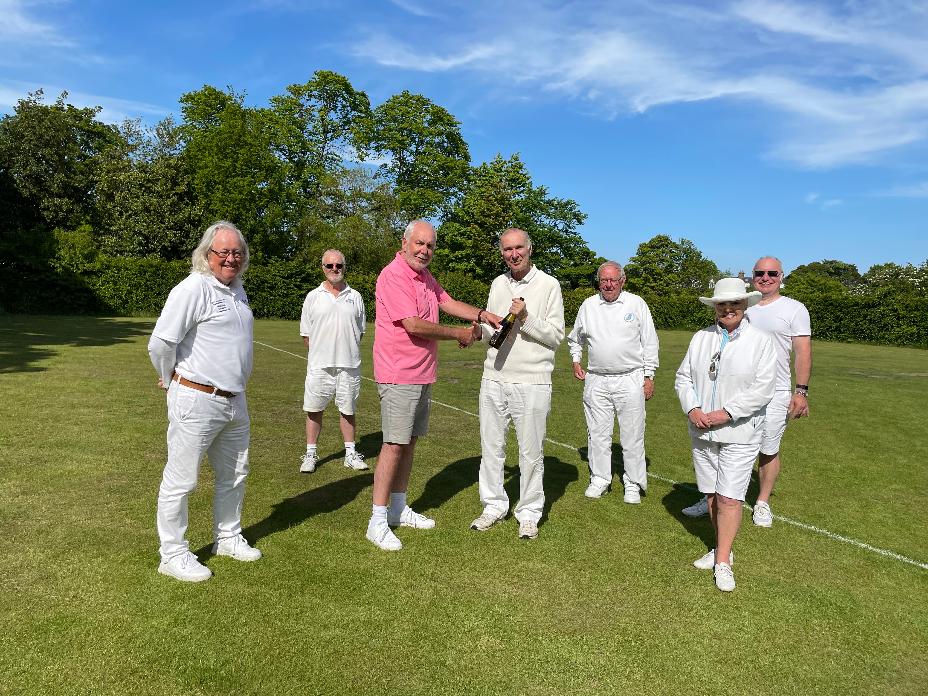 The Secretary's Shield is a national AC Handicap competition featuring a nominated team from each Croquet Federation.  Tyneside are Croquet North's representative by dint of being the highest placed CN club in the East Pennine League in 2019 having been denied the chance to compete in 2020 because of the pandemic.
In the 1st Round Tyneside were drawn against the East Midlands Federation's representative Nottingham CC.   Much to their credit Nottingham eschewed the option of suggesting a neutral venue, the thought of travelling so far north puts most clubs off, and took a chance on winning the toss for home advantage.  Their gamble did not pay off and they duly shlepped up to meet us at Exhibition Park.
The format is a nominated pair from each side play Handicap Doubles whilst the reamaining two members of each side play Handicap Singles.  Then in the afternoon each side's players are listed in ascending handicap order and they play their counterpart from the other side.
The first match to finish was a singles with Derek Watts (1½ handicap) losing to Bob Thompson (2) 16-26.  The other singles was next as Derek Johnson (8) went down to John Filsak (3) 20-26.  Fortunately for Tyneside in the doubles Phil Errington (½) and Terry Vernazza (4) proved too strong against Martin Beacon (2½) and Mark Lansdale(9) winning 26-14.
So at lunch Nottingham led 2-1, needing just two of the afternoon's four singles for victory.  Once again Derek Watts was the first to finish, this time seeing off Martin Beacon 26-8 in the match beweein the two No. 2s.  News then filtered down from the Clock Lawn that Phil had beaten Bob Thompson in the top match 26-13.  Terry came through against John Filsak 26-15 and finally Derek Johnson completed the clean sweep of the afternoon singles beating Mark Lansdaleby the same score.
So Tyneside won 5-2 and go through to the next round, which is the quarter final, where they will play St. Albans.

The traditional season opener for us higher handicap AC players took place slightly later than in past years but failed to attract the usual number of entrants from north of the Tyne with only Derek Johnson entering.  Many familiar faces from the host club were similarly missing from the lineup.  Block A was Fiona Crompton (10 handicap, York), Julian Gibson (10, Middlesbrough), Anthony Miller (3, Middlesbrough) and Derek Johnson (10, Tyneside).  Block B was Jim Gillespie (10, Beverley & York), Steve Skelton (3, Keswick), Roger Staples (3.5, Middlesbrough) and John Crompton (12, York)
The eight entries were divided into two blocks of four with all-play-all 18 point games.  At the end of the first day the top two from each block progressed to Block 1 and the bottom two to Block 2.  The results were:

As a result the Tournament Manager and CA Handicapper, Charles Waterfield cut Derek's handicap from 10 to 8 and the Automatic Handicap System meant Anthony's handicap reduced from 3 to 2.5.  In addition, Jim Gillespie gained his Bronze merit award. 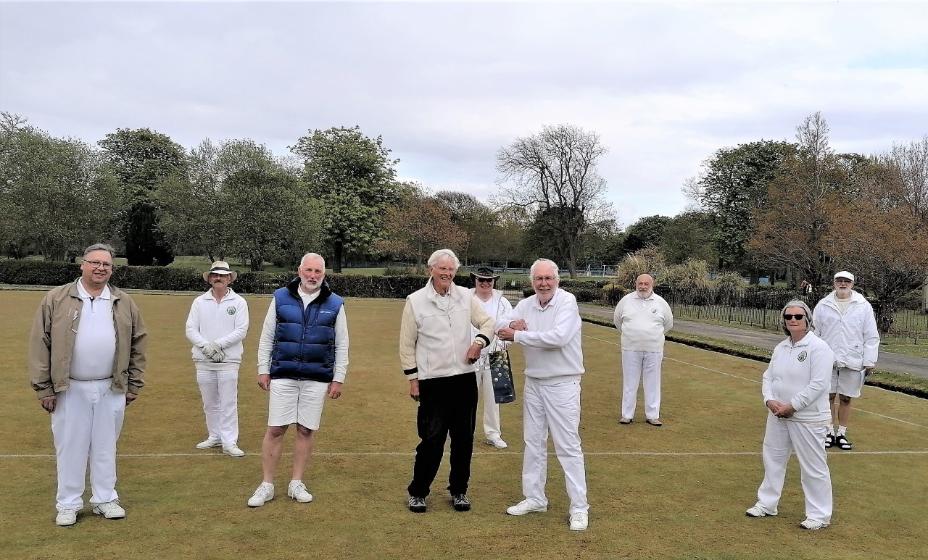 The weather was good for Middlesbrough Croquet Club's first Tournament of the season. The field comprised 6 players from Croquet North Federation area plus two regular visitors from Yorkshire and Cumbria.
For the majority of players this was the first competitive outing of the season and this together with time limit of 2 hour 15 minutes resulted in a majority of games going to time.
After a wobble in his first game Derek Knight then got into his stride running out a worthy winner.

Good to be playing croquet again and in the current Covid restricted environment another success for the increasingly popular one day tournament format. 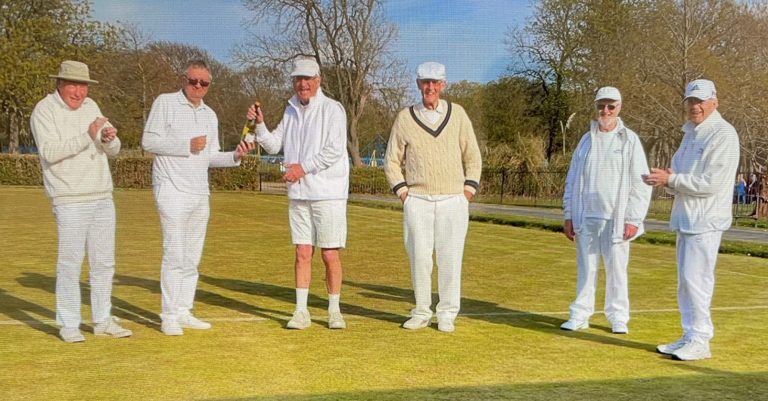 Once again the Club's competition was attached to the Croquet Association's national One Ball competition that supports a nominated charity.  This year's charity is the British Heart Foundation and the 12 entrants' £5 entry fees and further donations from non-playing members contributed £90 to the BHF's coffers.
When inviting entries the Tournament Manager had stressed that high handicap GC players stood just as much chance as the most experiences AC players because of the sophisticated handicapping system that had evolved over the years.  It was particularly gratifying therefore that one such player, Dave Okell (9 GC handicap) should emerge triumphant, even more so with a 100% record.
Experience had taught that all-play-all was overly ambitious so a Swiss format was adopted whereby playera are matched against players with similar records.
1st  Dave Okell          7 wins from 7 matches
2nd Eric Nixon           5 wins from 7 matches
3rd= Derek Johnson 4 wins from 7 matches
3rd= Terry Vernazza 4 wins from 7 matches 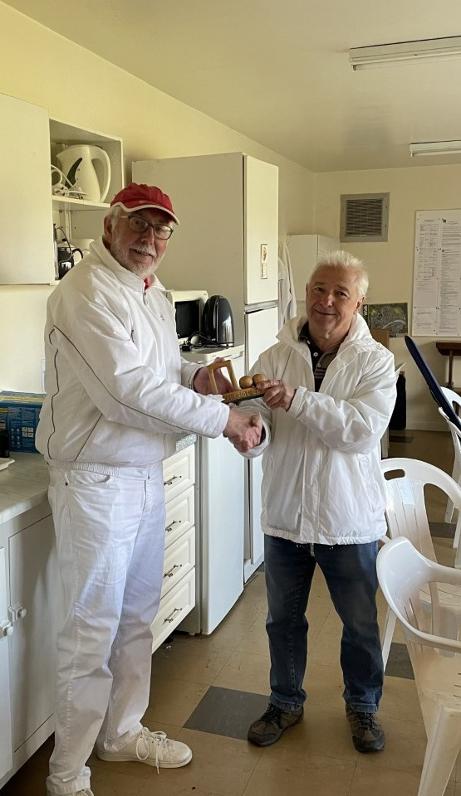 A good turnout, perhaps not surprisingly, for the opening day of the 2021 season filled with various forms of not-too-serious croquet including Pirates, 3-a-side croquet and a new game invented during the week when we were marking out the penalty areas for GC on the halfway line and East/West boundaries.